West Virginia Bike Laws: What You Can and Cannot Do

West Virginia is home to hundreds of avid bicyclists, each of whom has the same rights and responsibilities on the roadway as motorists. There are specific laws in place regarding bikes in West Virginia to reduce the number of collisions and protect vulnerable bicyclists in the event of a crash. Bicyclists are more at risk during an automobile collision than occupants of the passenger car. Abiding by bike laws gives bicyclists the best chance of avoiding a harmful collision. 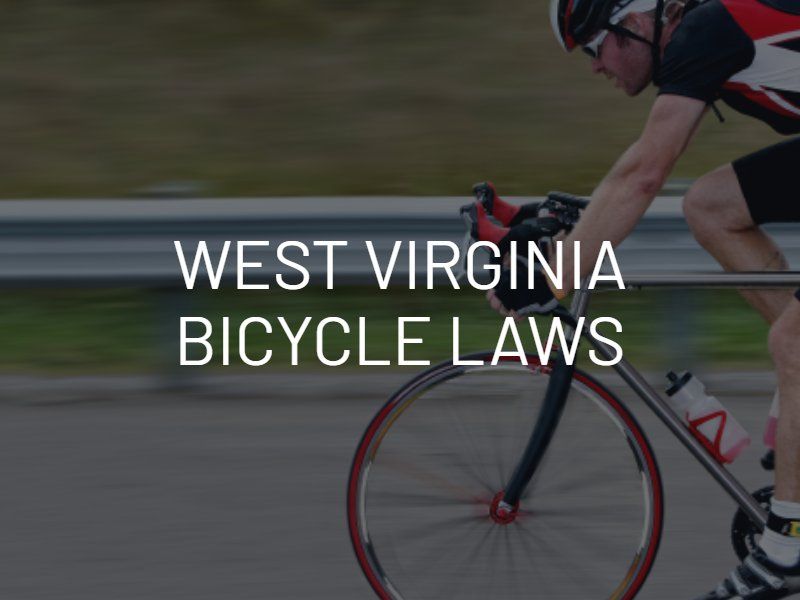 Bicyclists Can Ride on the Roadways

Bicyclists can use the roadways like a motor vehicle, except for on major highways and if there is a bicycle path adjacent to a roadway. West Virginia laws require bikers to stay as close to the right side of the road as possible. Bikes must move in the same direction as traffic and abide by the same rules of the road. They cannot run stop signs or red lights, nor can they turn without using a hand signal. When passing a stationary vehicle, bicyclists must use extra caution in case of a door opening into the bike. Bicycles are also allowed on sidewalks.

Bicyclists Cannot Ride Under the Influence

The same laws that govern drinking and driving a motor vehicle apply to bicycles. Many people mistakenly believe that riding a bike while drunk or under the influence of drugs is not against the law. While it may be safer than getting behind the wheel of a passenger vehicle, it is still just as illegal. West Virginia defines bicycles as vehicles. Thus, all laws that apply to vehicles also apply to bicycles.

It is illegal in West Virginia to bike with a blood alcohol content (BAC) level of 0.08% or higher if you are at least 21 years old and of 0.02% or higher if under the age of 21. A bicyclist can receive a DUI for biking under the influence, with the same penalties as driving. A first-time DUI may include up to six months in jail, fines of $100 to $1,000, and license suspension for 15 to 45 days.

Bicyclists Can Ride Without a Helmet

If a bicyclist is over the age of 15, he or she can legally ride without wearing a helmet in West Virginia. According to Section 17C-11A-4 of the West Virginia Code, all children 14 and younger must wear a bicycle helmet. This is the “Child Bicycle Safety Act” of the state, which is in place to help protect children from head injuries. Police will hold parents who fail to equip their children with bicycle helmets responsible. Adults, however, are free to bike without helmets. State courts do not permit the lack of wearing a helmet as evidence against someone in a personal injury case.

Bicyclists Cannot Ride at Night Without a Light

According to West Virginia law, all bicyclists who want to ride at night must equip their bikes with a front lamp that emits a white light that is visible from at least 500 feet away. The back of the bicycle must also have a red reflector that is visible from 50 to 300 feet to the rear when directly in front of a motorist’s headlights. Bicyclists may also use a red light on the rear of the bike in addition to the reflector that emits light visible from 500 feet away.

Bicyclists Can Ride Two Abreast in a Lane

Similar to motorcycle laws, West Virginia bicycle laws allow two bicycles to ride next to one another in one lane. However, no more than two bicycles can ride abreast unless bicycles are on a path specifically designated for bikes. Bicyclists cannot carry more than one person on a regular, attached bike seat at a time. No bike can carry more people than it is equipped to hold. Bicyclists cannot attach themselves to vehicles on the roadway.

Bicycle accidents can result in catastrophic injuries such as broken bones and therefore, bike laws are put in place to help keep cyclists safe. If you were injured in a collision through no fault of your own, it is important to speak with a West Virginia personal injury lawyer experienced in bicycle accident cases as soon as you are able. You may be entitled to compensation for your injuries and a seasoned professional can explain your available legal options moving forward.

The only way to be certain about whether you have a personal injury case is to talk to an experienced accident...READ MORE

Compensation for your injuries depends on several factors, including the extent of your injuries, physical...READ MORE

Before accepting a settlement, it is always in your best interest to consult an attorney. Adjusters work for...READ MORE

Many injury claims can be settled for their full value through negotiation, mediation or arbitration, without...READ MORE

You should consult an attorney as soon as possible after being injured. In most cases there is a time limit for...READ MORE

The success of personal injury attorneys is based on several factors, including education, legal skill...READ MORE

Tiano O’Dell will be happy to provide you with a free, no-obligation evaluation of your prospective personal...READ MORE

Experience you want. Results you need.

Call us (304) 720-6700 (304) 720-6700
Tell Us About Your Case In order to help you more quickly, please
fill out the form below and click “submit”.
A representative of the firm will call you shortly.
No Fees Unless We Get You Money
Attorney Advertising. This web site is designed for general information only. The information presented at this site should not be construed to be formal legal advice nor the formation of a lawyer/client relationship. Please be advised that the fact that you contact the law firm of Tiano O'Dell, PLLC or that we respond to your email does not result in us accepting any responsibility to advise or represent you. No attorney/client relationship begins until both you and a Tiano O'Dell, PPLC, attorney sign a written agreement regarding representation.   Google+