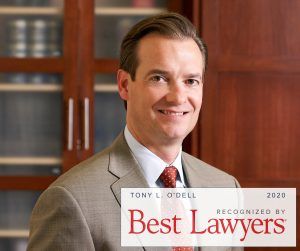 Tony O’Dell of the Charleston-based law firm, Tiano O’Dell PLLC, will be featured in the 26th Edition of The Best Lawyers in America for his high caliber work. O’Dell now ranks among the top five percent of private practice attorneys nationwide, as determined by his peers.

O’Dell received his bachelor’s degree in Business from Marshall University and obtained his law degree from the West Virginia University College of Law in 1991. He was admitted to practice law in West Virginia’s state and federal courts later that same year.

In the past, O’Dell was named one of the Top 100 Trial Lawyers by the American Trial Lawyers Association and was inducted into the West Virginia Super Lawyers in 2014. Tiano O’Dell PLLC also holds an AV rating from Martindale-Hubell, which recognizes the firm for their strong legal ability and high ethical standards.

O’Dell’s name and practice featured in Best Lawyers in America is impressive as the publication is regarded as the most credible measure of legal integrity and distinction in the United States by both the profession and public. Recognition by Best Lawyers symbolizes excellence in practice.

Best Lawyers is based on a rigorous peer-review survey comprising more than 8.2 million confidential evaluations by the top attorneys. By receiving this recognition, O’Dell now has the privilege to participate in voting for next year’s edition.

This entry was posted in Uncategorized. Bookmark the permalink.

The only way to be certain about whether you have a personal injury case is to talk to an experienced accident...READ MORE

Compensation for your injuries depends on several factors, including the extent of your injuries, physical...READ MORE

Before accepting a settlement, it is always in your best interest to consult an attorney. Adjusters work for...READ MORE

Many injury claims can be settled for their full value through negotiation, mediation or arbitration, without...READ MORE

You should consult an attorney as soon as possible after being injured. In most cases there is a time limit for...READ MORE

The success of personal injury attorneys is based on several factors, including education, legal skill...READ MORE

Tiano O’Dell will be happy to provide you with a free, no-obligation evaluation of your prospective personal...READ MORE

Experience you want. Results you need.

Call us (304) 720-6700 (304) 720-6700
Tell Us About Your Case In order to help you more quickly, please
fill out the form below and click “submit”.
A representative of the firm will call you shortly.
No Fees Unless We Get You Money
Attorney Advertising. This web site is designed for general information only. The information presented at this site should not be construed to be formal legal advice nor the formation of a lawyer/client relationship. Please be advised that the fact that you contact the law firm of Tiano O'Dell, PLLC or that we respond to your email does not result in us accepting any responsibility to advise or represent you. No attorney/client relationship begins until both you and a Tiano O'Dell, PPLC, attorney sign a written agreement regarding representation.   Google+